skip to main | skip to sidebar

Welcome back for another Nice Day. It's only the second episode and we're already on a popular 60s TV plot, the visiting Arab potentate (used on BATMAN and GET SMART). So expect savage Arab stereotyping, uncontrollable urge for wives, and what's generally a hard episode to get through. 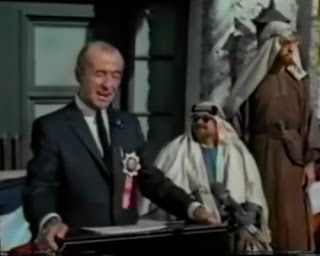 Big Town is agog with excitement as Sheik Abdul Bimir arrives for a ceremony at City Hall. Mayor Finney (even wearing one of those cartoony big mayoral badges with ribbon) introduces the dignitary and talks about his country's value in terms of supplying oil (naturally). Our Hero Carter Nash (William Daniels of course) is in the crowd and spots a bedouin-looking gentleman trying to heave a decorative cement sphere loose from it's moorings... and onto the sheik. Carter tries to tell the policeman next to him, but he and everyone else shushes him. 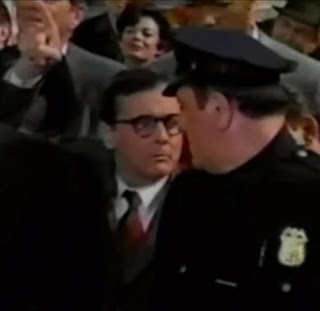 So Captain Nice goes into action, changing in a conveniently open florist's van. He catches the tumbling architecture as it falls. Dumb as a brick Chief Segal (Bill Zuckert) yells to "Get the police!" after the would-be killer (reminded that he *is* the police, "I certainly got here fast.") Carter asks the mayor if he'd mind holding the objet d'art and flies off, while Sgt. Kane explains Captain Nice to the sheik, "He's always around when there's trouble." ("Who isn't?) 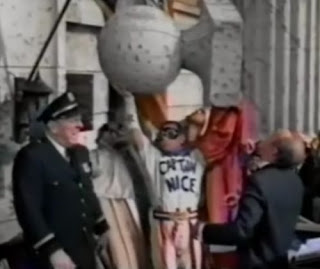 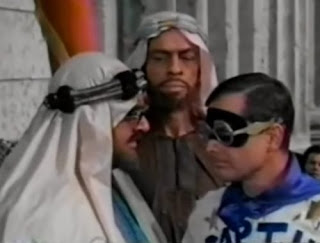 Our hero returns having failed to nab the culprit. The sheik threatens vengeance when the perpetrator is caught, including lashes. Captain Nice says he should show mercy. "Mercy for a man who tried to kill me in cold blood not two minutes ago?" Captain Nice's riposte: "I know, but how long are you gonna hold a grudge?" 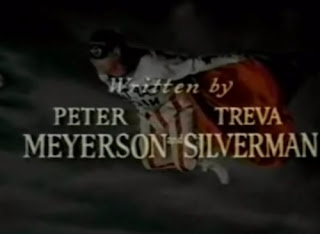 Credits. This is the first of five episodes co-written by Treva Silverman, who was one of the main people behind THE MARY TYLER MOORE SHOW but also had credits on shows ranging from THE MONKEES to LANCELOT LINK: SECRET CHIMP (okay, no great leap there). Her co-writer on all five was Peter Meyerson, with whom she wrote on THAT GIRL and HE & SHE. Solo, Meyerson scripted MONKEES as well and went on to a lengthy stint on WELCOME BACK, KOTTER. 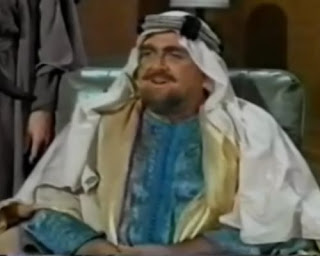 Now Sheik Abdul gets down to business in the mayor's office. The sheik is played by Larry D. Mann, who was a familiar TV character face, often in dialects (three different nationalities on HOGAN'S HEROES) and had been on GET SMART the previous year. The Canadian born Mann would be a regular on POLICE SURGEON in the 70s and had guest roles on US fare including GREEN ACRES, COLUMBO, IRONSIDE, BEWITCHED, and MY FAVORITE MARTIAN. In later years he often played judges (recurring on HILL STREET BLUES) but his biggest pop culture contribution was as a voice actor, heard in Rankin/Bass's Toronto-recorded projects including RUDOLPH THE RED-NOSED REINDEER (as Yukon Cornelius!) and WILLY McBEAN AND HIS MAGIC MACHINE (Professor Von Rotten). He played multiple roles for Filmation (including several secondary Groovie Ghoulies) and DePatie-Freleng (Crazylegs Crane, Blue Racer, and others).

The sheik is in town for a massive shopping spree, even expressing a desire to buy the whole city ("I can send back what I don't use.") While the mayor telephones local merchants, Sgt. Kane brings a report to the chief and catches the sheik's eye. He in turn tells his chief aide Ibid (James Lanphier) that he wants her, while a weary Ibid says he's up to 119 wives. 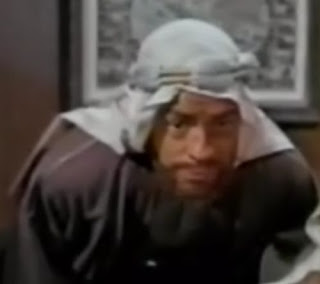 Ibid is played by James Lanphier, a familiar character actor who (due to both a facility with dialects and a fairly swarthy complexion) was often cast as various ethnicities, including Middle Eastern, Indian, and European, and when not tied to a nationality, often exuded superiority as manservants or maître d's. He was one of Blake Edwards' favorite players, playing the ethnic speciality in THE PINK PANTHER (as the Princess of Lugash's faithful protector) and DAYS OF WINE AND ROSES (a foreign prince) and his more servile function in THE PERFERCT FURLOUGH (assistant hotel manager), THE PARTY (chief butler), and a regular for the final season of PETER GUNN as restaurateur turned headwaiter Leslie, plus a passel of other Edwards projects (BREAKFAST AT TIFFANY'S, OPERATION PETTICOAT). Outside of Edwards, he played usually untrustworthy, usually spying foreigners on GET SMART (of course), THE WILD WILD WEST, THE GREEN HORNET, and MISSION: IMPOSSIBLE.

Ibid follows his sire's wishes by asking for extra police protection, and the sheik chooses Sgt. Kane. As for the assassin, the sheik says to look out for a Dulumba tribesman, "bloodthirsty animals who murder and plunder without conscience." Mayor Finney tuts that they sound dangerous. "Yes, we are."

The rampant stereotyping moves to the crime lab as Sgt. Kane gives the sheik and Ibid a tour and introduces them to Carter Nash. The sheik expresses a healthy interest in scientific technology, but when he asks Carter to simplify how a microscope works, it boils down to "It's magic." (Hoo boy.) Carter demonstrates a lie detector, and the sheik mentions the method they employ: "We chain the suspect to a post in the blistering midday sun, then the entire village gathers round and stones him to death." "But then you never know if he's innocent or guilty!" "We're still ironing out the kinks." These are the "jokes," folks. 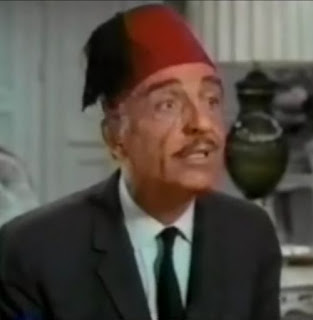 Sheik's hotel room. Sgt. Kane goes through an inventory of what the sheik has bought. Then enter a man in a business suit and fez, Yebba, who runs a local Dulumba business. He's played by Jan Arvan, who was a semi-regular in the earliest installments of ZORRO (as Nacho Torres, a local don pursued by the corrupt commandante) and was a regular foil to Red Skelton on TV (often as Clem Kadiddlehopper's paw, as well as various straight roles). He did a GET SMART, of course, and popped up on GREEN ACRES, THE BEVERLY HILLBILLIES, THE MUNSTERS, THE VIRGINIAN, POLICE WOMAN, BEWITCHED, and scores more. In film, he was the ship's doctor in THE POSEIDON ADVENTURE.

Yebba brings a gift from himself and the staff ("Some of the guys only chipped in a quarter.") Sgt. Kane checks it with a bomb detector, which goes off. She dunks the package in water, though Yebba claims it's a pair of lovely earmuffs. As the hapless merchant is dragged to a room by Ibid, Sgt. Kane finds the box contained... lovely earmuffs. Then an explosion: the bomb was Yebba himself (!) The sheik is even more enamored now that the sergeant has saved his life and proposes marriage. The sergeant seizes on the excuse that she belongs to another and names Carter Nash.

Cut to the man himself in the mayor's office, pointing out that the sheik is a cruel vicious man, hated by his own people and shunned by civilized nations. The mayor, however, only cares about how much money he'll spend (first really accurate part of the episode). Enter Mrs. Nash (Alice Ghostley) at last, and her first name is revealed as Esther. She's irked that her brother hasn't arranged for her to entertain the visiting sheik. The mayor thinks it's a great idea, and Mrs. Nash would have mentioned it earlier but she was having the invitations printed. (The laugh track responds dutifully. I did not.)


Carter delivers the invitation, and the sheik has his harem greet Carter, hoping he'll "take one of them for your very own" and thus leave Sgt. Kane free. When this fails, the sheik plots with Ibid to poison Carter at Mrs. Nash's luncheon, with rare poison Yopa. 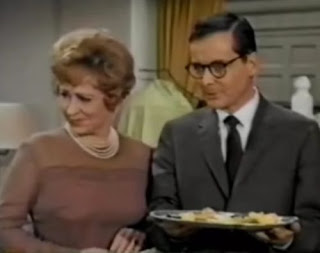 At the luncheon, Mrs. Nash is charmed and doesn't understand why Carter thinks the sheik is cruel. Carter explains they finally found the assassin... in little bits. In the dining room, Ibid injects poison in a roll on Carter's plate (Mrs. Nash's place cards are most helpful). 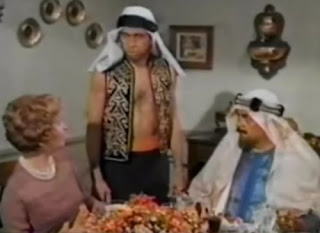 The sheik calls in his food taster, Fetta (Fred Villani). Villani had mostly bit parts on THE MAN FROM U.N.C.L.E., MISSION: IMPOSSIBLE, PETER GUNN, THE WILD WILD WEST, and McMILLAN AND WIFE. Carter feels sympathy for Fetta and offers him his roll, which the hungry taster eagerly consumes (Ibid seems about to stop it but the sheik raises a hand). Fetta drops dead, alarming everyone. Boy, so many chuckles in this outing! Ibid passes it off as a failed attempt on the sheik's life, and the mayor and Chief Segal escort the sheik to his hotel. Carter realizes the poison was meant for him (when he tries to explain to Mom that Sheik Abdul has 119 wives, she says "Every man should have a hobby.") 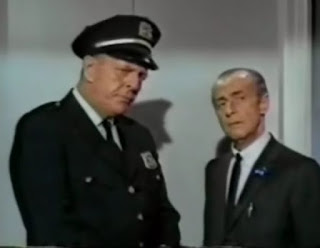 Hotel room. The mayor and chief fuss over the sheik before leaving... at which point he drops a sack over the sergeant while Ibid threatens to kill her if she makes a sound. We cut back to the mayor and Chief Segal waiting for the elevator. Te chief stakes Sgt. Kane's life that she can handle it, but the mayor is now anxious to be rid of the visitors, especially after the death at lunch. He admits he's starting to believe the tales of the sheik: "He's cruel, vicious, uncivilized, and dangerous." Chief Segal agrees but adds "And yet, there's something about him I don't like." (This is a GET SMART-esque gag, implying the chief is fine with the rest of it, and the closest to an actual funny gag the whole episode.) 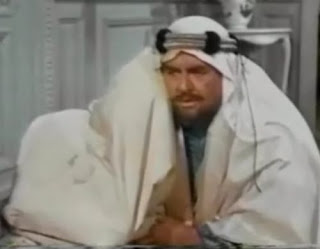 The sheik cradles the captive sergeant, claiming she'll learn to love him over the years... and then he'll let her out of the sack. Carter arrives and changes into Captain Nice in a utility closet (after carefully placing his glasses in his suit jacket pocket, which he hangs up). Captain Nice intervenes but Ibid threatens to stab Sgt. Kane. He yields, and the sheik summons burly torturer Sopar. 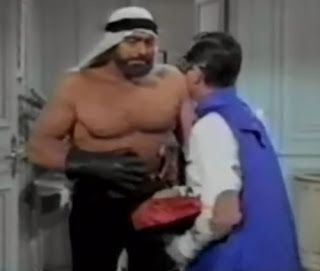 He's played by Harry Varteresian, a real life strongman and arm wrestler known as Turk who acted occasionally, playing circus strongmen and other tough guys on GET SMART (again), LOST IN SPACE, and THE GIRL FROM UNCLE (later ran a restaurant, later died). Our hero warns Sopar that he doesn't want to hurt him and just lets him break furniture against him (while the sheik and Ibid make a getaway). Captain Nice brushes off the debris, and when Sopar lunges at him, he tumbles out the window... above the sheik. Captain Nice tries to warn the potentate, but he's crushed to death by his heavy minion (nothing shown, but Carter turns away in disgust, also a GET SMART tactic). He flies down, where a crowd gathers around the bodies, and insists Ibid open the sack. Sgt. Kane is finally freed, and she tells Ibid he's under arrest for murder, assault, and attempted kidnapping. ("You arrest people for *that*?") Sgt. Kane is grateful but "doesn't care much for muscle men" (her real passion is for Carter).

Coda. Carter presents the lab findings, while an admiring Sgt. Kane repeats what he says. After some forensic discussion, he wonders if Ibid will be tried by their laws or ours:
when a tribesman lies, they cut off his tongue, and they cut off his hand if he steals. If he murders? They cut off his allowance. (Ha ha ha).

Boy, this one was a chore to get through. And sadly there's at least one more heavily racist episode to come (by the same writers, who also scripted the *best* episode in the series). But the next episode is more promising, a real superhero-style plot, "That Thing." Join us, won't you.